Monitoring focuses on the environmental conditions believed to be conducive to HABs. Federal, state, tribal, private, and academic researchers coordinate at all stages and incorporate new tools and methods into the monitoring plan. The ORHAB project monitors plankton, toxins, and water quality along the WA coast to determine the environmental conditions associated with blooms of Pseudo-nitzschia  and other biotoxin producing species.

The working hypothesis is that harmful algal blooms over the Washington continental shelf is the source of biotoxins in shellfish on coastal beaches. The precise timing of physical processes (currents, winds, upwelling, and downwelling) determines whether a biotoxic bloom will be advected (move) into the nearshore region and be sustained there long enough for shellfish to become toxic. The project determines the temporal and spatial distributions of HAB species and relate these to hydrological and meteorological parameters using standard oceanographic and biological methods. 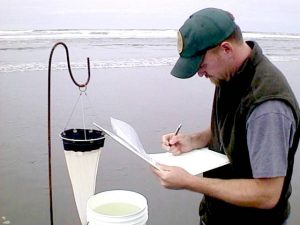 Data from individual ORHAB partners is collated, quality-controlled and summarized in regular ORHAB updates to Marine Resource Managers and regional research partners. Data sharing outside of the partnership is decided after review by ORHAB steering committee approval. Data collected from two decades of continually and frequent ORHAB sampling has been used in 72 scientific publications.

As the result of decades of monitoring and research, both locally and around the world new more rapid techniques for the detection of biotoxins both in the water and in shellfish have been implemented. A major goal of ORHAB, since it’s inception, is the development and implementation of rapid biotoxin detection technologies to complement current monitoring strategies to provide the best protection from human exposure to these biotoxins.

Examples of new tools and technologies that ORHAB uses or provides assistance in implementing are:

Classical surveillance of marine and estuarine environments for harmful microorganisms is labor-intensive and expensive. This often results in reduced sampling frequency, particularly in remote areas with limited access, which can increase the likelihood of missing a “bloom” event. The ESP represents a significant advance in biological sensing systems. It is an autonomous, in situ, sampling and analysis unit that employs DNA-based technology to detect microorganisms in water samples. The entire process, from sample collection through results delivery via telemetry, can occur in as little as 3 hours. The ESP can detect toxin-producing harmful algae such as Alexandrium, a producer of potent saxitoxin that cause the potentially deadly disease paralytic shellfish poisoning, as well as fish-killing harmful algae (e.g., Heterosigma).

See video of the ESP here.

ELISA tests are used by ORHAB partners to rapidly assess the presence of the bio toxins in seawater and shellfish. This tests are used to provide an early warning of the presence of toxins and do not replace the standard regulatory testing conducted by Washington State Department of Health.  However, the ELISA test has been used to enact emergency closures of shellfish harvest.

See the video of ELISA here. The Submaran S10, is  a prototype autonomous surface/underwater vehicle. When deployed it collects to samples seawater  that are later analyzed in the laboratory for phytoplankton and the presence of biotoxins. The Submaran is the first wind and solar-powered vessel built for extended surface and sub-surface sampling. The Submaran can allow for increased capacity to sample the Juan de Fuca Eddy, one of the known initiation sites for HABs off the Washington coast.  The effort is contributing to the development of a NOAA Pacific Northwest HAB Bulletin, a forecast system that supports the management of shellfisheries, clamming beaches, and human health.

The Submaran was launched in its pilot mission in September 2018 when it will collected water samples and then deliver them to the Makah Tribe Water Quality Lab for analysis.  Sampling water from otherwise difficult to reach areas known to be points of origin for HAB organisms (often called hotspots) can show early signs of a developing bloom and will enhance the PNW HAB Bulletin’s forecasting ability.

A video of the Submaran can be found here.

The following media reports were made possible through collaboration with ORHAB: